Slowloris is among the well known "Denial Of Service" (or DOS) tool used by both experienced attackers and script kiddies. This evening, I've been testing mod_evasion and mod_antiloris on Apache httpd /2.2.15 (Oracle Linux 6.5 using Redhat built Kernel).

The loaded module (mod_evasion), can't save Apache httpd from the DOS attack, even loading the site from a browser is somehow impossible.

But this module can prevent a brute-force attack (e.g. an automated script to guess a password field in a web-form) in a web server (running Apache httpd).

Nginx gracefully made it by ignoring the request from Slowloris. But I noticed a brute-force attack is possible while using Nginx default settings! Nginx access logs 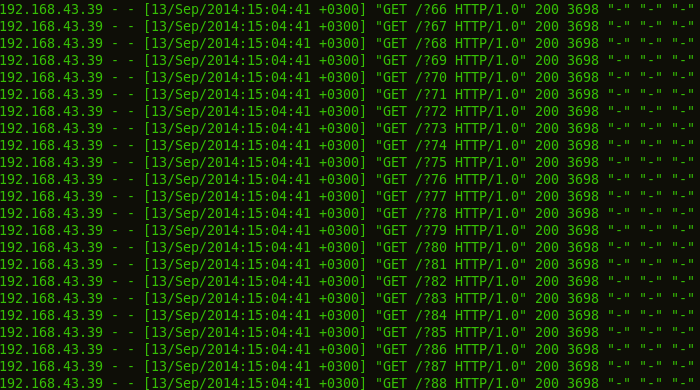 mod_antiloris played it nice by monitoring the requests coming from the client and rejected extra connections. Accessing the web services from the browser was not interfered.

mod_evasion is cool but can't save Apache httpd from Slowloris. On the other hand, mod_antiloris worked fine and denied Slowloris a chance to mess up with the Apache httpd server.

Why did mod_antiloris pass the test and mod_evasion fail?.. Why did Slowloris work on Apache httpd and not on Nginx?

Slowloris is written in Perl, it simply plays around with CR (Carriage Return) and LF (Line Feed) at the end of every incomplete HTTP request header. A blank line after the request header is used to represent the completion of the header in HTTP. Since the request is incomplete and the timeout is 300 seconds, Apache httpd will keep the connection alive waiting for the remaining data, while Slowloris keeps on sending the incomplete HTTP requests resetting the timeout counter.

As a result, all available connections will be sucked up by Slowloris and cause a Denial of Service. mod_antiloris helped Apache httpd beat Slowloris but you can also use IPtables by setting a connection limit or putting Apache httpd behind Varnish. Another solution I've not tested is using a Hardware Load Balancer that only accepts full HTTP connections.

Nginx uses a much more event-driven (asynchronous) architecture that can be scaled, instead of the "Maximum Connections" as in Apache httpd. So, in a nutshell, Nginx ignores the requests from Slowloris and processes other "full" connections.

This is not to claim that Nginx is bullet proof by default, tools like golris can mess with your Nginx server (when running with default settings), though you can always protect this from happening by using Nginx "Http limit connection" module / IPtables / deny POST requests or patch Nginx, so it drops connection if the client sends POST body at a very slow rate.

But I'll always go with Nginx whenever possible!

I think Apache httpd should find a way of prioritizing clients sending full HTTP requests to minimize DOS attacks of the (above) described nature...